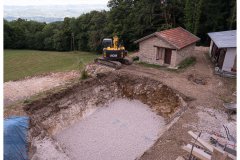 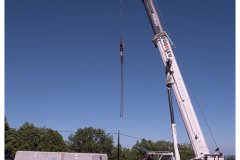 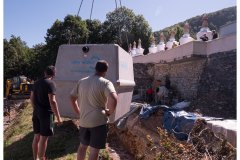 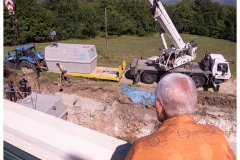 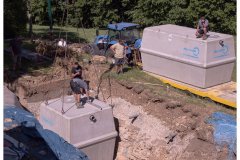 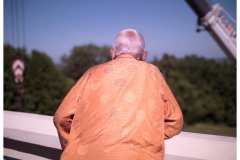 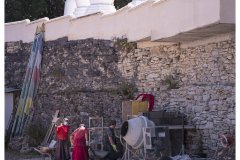 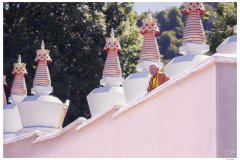 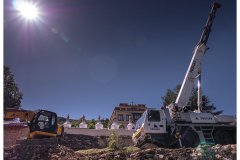 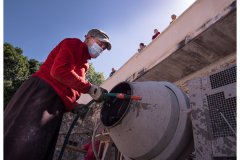 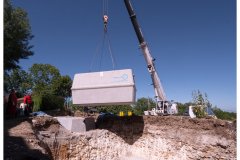 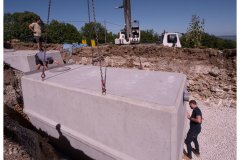 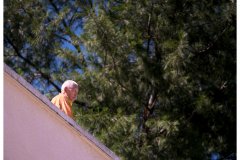 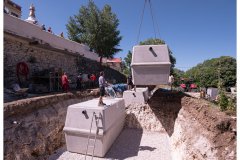 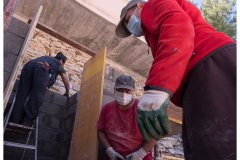 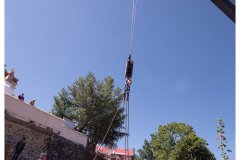 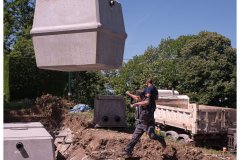 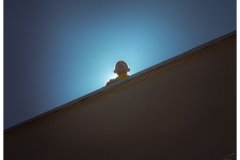 In the Montchardon adventure, there have been engaging and federating projects such as the construction of a stupa or temple, and others that are less exhilarating but of prime importance for daily life, such as the creation of a new water treatment plant for the Centre.

Because Montchardon is far from the surrounding villages, it is impossible for us to connect to the communal sewage system. In 1988, the public authorities having asked us to establish an autonomous system, we built a 100m3 concrete pit where all waters from Montchardon are gathered and treated before infiltrating naturally into the ground. Located below the campground underneath the 8 stupas, this installation had so far given us complete satisfaction.

Recently, during the building permit process for the new building, the Administration asked us to increase the capacity of our sewage system. A specialized engineering office advised us to bring the installation up to current standards, which are more environmentally compatible. This advice seemed very relevant to us, since we had been aware of the limits of the system for some years. After studying the situation, and taking into account our present and future needs, the expert helped us choose a new installation capable of treating the effluents of a site receiving up to 200 people. The current capacity being about 130 people, this will also ensure our future development needs.

The chosen solution consists of a biological treatment plant, entirely buried so as to be unnoticeable in the environment. Water is treated by a population of bacteria attached to a support. A clever aeration system facilitates the development of aerobic bacteria which degrade the polluting materials contained in waste water. This makes it possible to obtain non-drinkable yet clean water, that can then be discharged into the natural environment by infiltration.

We wanted to replace the old system under the 8 stupas with the new one before the beginning of the summer courses. We called upon our friend Florent Lamberton, an excavation specialist, who has been working at the Centre for many years with great competence. He coordinated this particularly delicate work: first of all, he delivered 6 large concrete tanks, some weighing more than 11 tons, and then placed them precisely in a 3.5m deep excavation the size of a public swimming pool!

On July 5th, 4 vehicles brought the tanks, preceded by a truck crane, necessary to handle them. All were positioned on an access road laid out for the occasion below the construction site. After the crane was deployed, the impressive operation of removing each tank was carried out easily, in a record time, under the watchful eye of Lama Teunsang standing on the top of the terrace of the 8 stupas.

The total cost of this operation is also impressive: €70,000! This may seem quite expensive… yet if this facility lasts as long as the previous one (32 years), it is an essential and very profitable investment for the Centre.

The 100m3 tank that served as an all-water pit was in good condition: we kept it so that once cleaned and restored, it can be used as a water reserve for the fire services, for watering or for various needs.

Our photographer and friend Salva has made a film and photos that you can see on the french version. 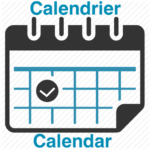